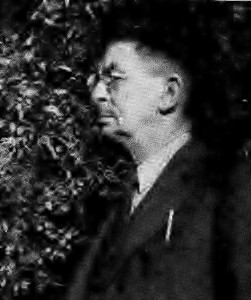 William Duane Dano was born February 12, 1875 in Sterling, Arkansas. His father Duane Dano, who was merchant in Lake Village died three months before William was born. His mother Jennie (Whittemore) died in April of 1875 he was then taken in by my Great Uncle Joseph B. and Julia A. Tallman. Joseph was the County Surveyor and Julia was involved with local education. They officially adopted him January 8, 1876, however, they began having marital problems and Julia took William and moved to Sparta, Wisconsin in 1880. Their divorce was official July 24, 1880. In Wisconsin, Julia was hired in November 1886 as the first matron in in the new public “Cottage” school for neglected and dependent children in Sparta. Julia would go on to raise Duane as her own until her death on Monday, January 21, 1901.

After graduating from Sparta High School in 1892 he enrolled at the University of Wisconsin. He graduated with honors with his B.S. in mathematics and physics in 1896. While there he was a member of the honor fraternity, Pi Kappa Beta. He taught during 1896-1897 at the High School in Madison, Wisconsin. In 1897-1898 he was a fellow at the University. He then taught math in 1898-1899 at the High School in Eau Claire. Next, he returned to the University as an Assistant Instructor of Mathematics while pursuing his doctorate. During this time he completed his thesis entitled “Singularities of the Quintic Curve.” A fellow classmate was Charles Max Mason, distinguished mathematician and physicist, who became President of the University of Chicago in 1925.

As he neared the completion of his degree, he married Anna DeMuth on June 22, 1900. With a new wife to support he was offered and felt he could safely take the headship at Montana State College while still completing his degree. He was hired at Montana State on January 1, 1901 becoming the first full professor and Chair of the Department of Mathematics. Tallman and his wife had three children; Mildred, Hazel, and Duane. Mildred attended MSC for three years but did not graduate, Hazel and Duane both graduated. Mildred married C. J. Altmaier and had six children. Hazel earned a doctorate in Romance Languages from the Sorbonne in Paris and married Rodger Guillaumant, a Frenchman and an art metal worker. They returned to the United States and she later became a professor of Romance Languages at Valparaiso Indiana. Duane worked with Rodger in the art metal business.

Anna died of cancer shortly after the birth of Duane. He then married her sister Maude S. DeMuth and they had one son, William, Jr. also an MSC alumnus. William Jr. later taught mathematics and music in Florida. Maude (DeMuth) Tallman received a B.S. in Mathematics – Physics from Montana State in 1907. While at Montana State she was a member of the Hamiltonian Literary Society.

After leaving Montana State in 1945 he moved to Corvallis, Oregon where he was Acting Professor of Mathematics from 1946 to 1948. Retiring, he and Maude moved to Carrabelle, Florida and later had a radical operation for lip cancer from his ever-present cigar. He died on August 19, 1961, she died December 8, 1963 in Palmetto, Florida. They are buried in Mansion Memorial Park and Funeral Home, Manatee County, Florida.

When he arrived on January 1, 1901 he rode up to the college on a street car in a howling blizzard to look the place over. For the next 45 years he literally wove his life into that of the college. Due to the heavy workload here he never returned to finish his doctorate.

Professor Tallman’s first courses at Montana State were Preparatory Geometry with 15 students; Freshman Mathematics with 25 students; and Calculus with 12 students. His first class in Differential Equations had 12 students. At the time of Tallman’s appointment no degree was offered in mathematics. Tallman at once organized many more courses in mathematics. Listed in the 1902-1903 catalog was the Collegiate Department with degrees in Agriculture, Mechanical Engineering, Electrical Engineering, Civil Engineering, and a Bachelor of Science degree in several General Science groups, including Botany, Chemistry, Domestic Science, English, History, Mathematics, Modern Languages, Physics, and Zoology. Tallman taught five courses in Algebra, Trigonometry and Logarithms, Analytic Geometry, Calculus, and The Method of Least Squares, and in alternate years, seven other courses in Differential Equations, Partial Differential Equations of Math. Physics, Newtonian Potential, Modern Algebra, and Advanced Analytical Geometry, Projective Geometry, and Theory of Functions. He was fond of recalling having taught as high as 26 hours per week.

He was also interested in athletics. His undergraduate specialty was track. At MAC he was frequently called in to judge track meets. An indication that athletics already played a role at MAC occurred in October 1902, when representatives from nine northwestern colleges met in Spokane, Washington to form the Northwest Intercollegiate Association, an athletics organization. Not surprisingly, Tallman was the representative from the Montana Agricultural College. He also organized the first all-state Basketball Meet. For many years he sponsored the Beta Epsilon fraternity and he was a charter member of Pi Kappa Pi. Tallman was a superb classroom teacher and a sympathetic advisor. A small group of scholarly men such as William D. Tallman, W. F. Brewer, William M. Cobleigh, Deane B. Swingle, and Robert A. Cooley must be credited with standing for (1) a more liberal program, (2) causing the school to base its offerings in Agriculture and Engineering more directly on science and mathematics, and (3) gradual elimination of the school’s trade school features. Tallman’s fond dream was a department with students and faculty capable of developing a graduate program. He was known as a two-fisted fighter and able debater in the faculty meetings. He more than once blasted unsound programs. His staff remembered him as generously sparing them whenever possible. He never assigned a task he would not perform himself. Late in his career at MSC he started a combined testing program complete with the necessary statistical study showing its validity. This was used for the next thirty years. He also authored a two volume book for the first two years of Engineering Mathematics. It was used for several years but was never formally published. His students remembered him as an artist in the classroom. His out of-class help was cheerfully given. His fondness for tobacco frequently caused his students to give him a box of cigars. He headed the Department of Mathematics until July 1945 when he retired. He was then named Emeritus Professor of Mathematics, the first from this department. Amazingly, he had been at Montana State for 45 years and had seen the presidency pass from Reverend James R. Reid, who was president when he was hired, to James M. Hamilton, named the third president in 1904, to Alfred A. Atkinson named the fourth president in 1919, to A.L. Strand named the fifth president in 1937, to Roland R. Renne, named the sixth president in 1943.

From the day he arrived in Bozeman, William Tallman strove to strengthen and broaden the Department of Mathematics’ curriculum. He recognized the importance of mathematics to the entire scientific enterprise at MAC. With the Bachelor of Science degree in several General Science groups, including Mathematics, being listed in the 1902-1903 catalog, Edna Lewis was granted the first Bachelor of Science degree in Mathematics in June 1903. Lowell R. King was granted the same degree in June 1904 as well as Clyde C. Penwell in 1906. Tallman’s efforts meshed well with the vision of James M. Hamilton, the third president appointed in 1904. Hamilton’s immediate plans were to transform MAC into a high grade technical college. This movement away from a training school to a college with its offerings in Agriculture and Engineering based directly on science and mathematics was a cornerstone of Hamilton’s vision and happened to fit precisely with Tallman’s ideas that he had begun instituting the day he arrived. Unfortunately, Hamilton’s “Education for Efficiency” also led to significant change that negatively affected the Department of Mathematics. Hamilton’s primary purpose was to avoid duplication between “the University and the College of Agriculture,” the University being the state university in Missoula and the College of Agriculture being in Bozeman. Thus in 1906 the separate degree courses in History and English were combined into one. Likewise, the separate degree courses in Mathematics and Physics were combined into one. In addition, the Agriculture program was eliminated and replaced with majors in Agronomy, Animal Industry, Horticulture, and Dairy. Also, the Division of Science was created. In the 1906-1907 catalog, the Bachelor of Science degree included different General Science groups, including Biology, Chemistry, Domestic Science, History-Literature, and Mathematics-Physics. These five General Science groups were first identified as belonging to the Division of Science in that same catalog. By now, Tallman taught six courses in Algebra, Plane Trigonometry, Analytic Geometry, Calculus, Method of Least Squares, and Theoretical Astronomy, and in alternate years, six other courses in Differential Equations, Partial Differential Equations of Math. Physics, Newtonian Potential, Algebra (advanced), Analytical Geometry (advanced), and Mathematico-Physical Seminary. A thesis was also required for the Mathematics-Physics degree, either in mathematics or physics. William M. Cobleigh appears to have taught all the other physics courses including seven courses in General Descriptive Physics, General Physics, Physical Measurements, Electricity and Magnetism, Electrical Measurements, Light and Sound, and Advanced Physics. In 1907 Annie T. Breneman, Frieda Mildred Bull, Maude S. DeMuth, Agnes Mountjoy, and Mabel Thorpe each earned a Bachelor of Science degree in Mathematics-Physics. In 1909 Frieda Bull earned a Master of Science degree in Mathematics-Physics. Of these early students, Annie T. Breneman, Frieda Mildred Bull, Maude S. DeMuth, Agnes Mountjoy, Mabel Thorpe, Amy Cooke, and June Hartman were all members of the Hamiltonian Literary Society.