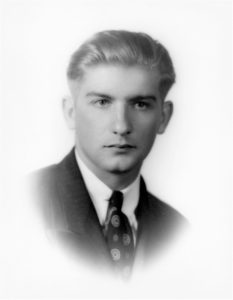 And now the story:

The Plane a B-24 Liberator was nicknamed “Lovey’s Dovies” its tactical call sign was “Yellow L”.  The Crew consisted of my cousin Co-pilot 2nd Lt Raymond F. Morse, the Pilot 1st Lt. Alexander Lovey and Navigator 2nd Lt. Donald E. Toomey.  The three were part of the original crew, while the other six were replacements.  The target that day would be Blechhammer South Synthetic Oil Refinery.  Approaching the target at an Altitude between 23,000-25,000 ft., the Weather was Clear and Visibility Good.  The approximate time was 11:20am and one of the crewmembers had just made the remark “looks like no flak today”.  At that very moment the aircraft was struck by flak in the no.3 engine.  The date Friday the 13th, October 1944 and if you were superstitious it was a bad omen, but for my young cousin on his 36th Bombing Mission and the pilot it turned out to be Black Friday.  It didn’t turn out much better for the rest of the crew either.  Raymond and Alexander Lovey would lose their lives that day while the seven-crew members that bailed would spend the rest of the war in a POW camp.  The 465th Bomb Group lost 4 B-24’s that day and their sister 464th also lost 3 B-24’s that day.  In fact, that Friday and Saturday were the 2 worst days of October 1944 for “Missing Air Crews”.

I grew up during the 50’s in the small town of Mayville, NY.  All my relatives lived around us within a block, grandparents, aunts, uncles and cousins.  It was a tight knit community and one didn’t have to travel beyond the corner store for most everything in those days.  I spent many winter nights playing canasta with Raymond’s mom and dad who lived just down the block from us.  His mother, my grand aunt Gertrude or “Gert”, looked forward to me joining them in the evening and sometimes would have a warm fresh baked apple pie waiting for me when I arrived.  I remember pictures of Raymond displayed in the house, but little was ever mentioned about him except the fact that he died in the war.  Now, since my own children are grown and have families of their own, I’ve become interested in my family tree.  Two things piqued my interest in Raymond, one was we’re losing so many of our Nation’s Greatest Generations; the other having inherited the letter written to his parents from 5 Star General Harold “Hap” Arnold.

Raymond enlisted on August 29, 1942 with only dreams of flying aircraft.  By October 1942 the AAF goal was up to 100,000 pilots a year.  Slightly more than 50% failed either the physical or written tests and as “washouts” were sent to the infantry.  Another 40% washed out of Primary, or Basic or Advanced schools.  After completing his specialized 4-engine training, he married his high school sweetheart April of ‘44’ and within a few weeks shipped out for Pantanella Air Base, Italy.  I think so often now of what the young man missed in life.  Never having the opportunity of having his own family, never experiencing such common items today as a TV’s, computers, cell phones or stereo music.  The opportunity of visiting old friends at 781st reunions or reading the “Pantanella Newsletter”.

Raymond and Alexander were buried in a common dirt grave alongside 16 other airmen from 4 other crashes in a Church Cemetery in Cisek, Poland under the supervision of the German Military.  A piece of propeller marked the grave.  Between April of ‘45’ and September of ‘47’ the Youth Chapter of the Polish Red Cross took care of the grave.  On September 11, 1947 they were disinterred by the Army Graves Registration Corps and moved to the Ardennes American Cemetery, Belgium.  From the fall of 1944 until January 8th, 1945 he had only been listed as Missing-In-Action.  In 1950 his parents requested his remains be returned for burial in Mayville Cemetery.  His flag draped coffin was escorted by Captain William H. Miller, USAF on the New York Central Railway from New York City to Westfield then on to Mayville for burial on July 15, 1950.

The seven crewmembers interviewed after their release from POW camps stated on “Individual Casualty Questionnaires” they believed “They were trying to keep the plane level so the rest could jump.”  I’ve had the opportunity of meeting, having several phone conversations as well as email with two men who were on that plane.  Walter Clausen the nose gunner and Pierre J.J. Kennedy the tail gunner both of whom have since passed on.  Pierre has both publicly spoken and published several articles about that day and on POW’s.  Because of these shared experiences the City of Middletown, CT honored him in 2016 by proclaiming May 15 as Pierre Jean Jacques Kennedy Day.

Originally there were no plans for bombing that day.  Many from the base had been given passes to go to The Isle of Capri.  Crews were scrambled and most of them that day were made up of replacements. 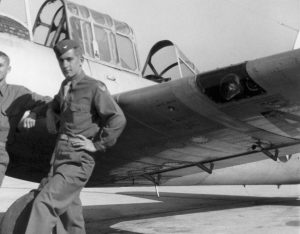 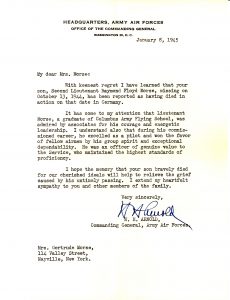