About the Tallman Apple

It’s been documented in several places about the Talman’s of Perinton, NY particularly Isaac’s son Darius as the family that propagated the “Tallman Sweet or Tolman Sweeting” in their orchards.

I’ve wondered about the “Sweet” because it isn’t really a sweet apple. It’s known as great steamed, its esteemed use in baking products, and making cider for its higher acidity. Isaac’s older brother Stephen who had a farm in Savannah over in Wayne County, NY also grew apples. One of his sons William was married to Amanda “Sweet”; could that possibly be a source of the nickname? Also, another of Stephen’s sons, George Washington Tallman wrote a letter from California in 1850 to his brother Stephen Jr. in Savannah in which he wrote “I would like to “eat sum of your fine apples””. My GG-grandfather grew apples after moving to Chautauqua County, NY in 1848. It’s in the 1840’s and beyond that the variety became a money maker for the family shipping it via the Erie Canal and later railway to New York City for markets. Prices for it can be found in newspapers of the day throughout the east. It wasn’t long before the variety was grown in many states.

What drew even more interest to me was when I received a color illustration (Shown below) of the apple from our cousin Ann van Leeuwen a descendant of Byron Talman, a grandson of Isaac. Thanks & a “Tip O’ Hat to Ann.” It’s even mentioned in the 1844 will of my 3rd great-grandmother Ruth Tallman.  She wrote that Ursula Clapp who shared a room in their house that she “could have as much of the fruit as she may want for her own use.” Ursula came to live with John & Ruth for many years John left her monies in his 1830 will.  I believe Ursula was Ruth’s niece the daughter of Elias Clapp who lived next to John & Ruth, Elias had died prior to 1809.

The exact history of the apple is unknown other than it was probably first grown in either Rhode Island or Massachusetts. The earliest of any variety first appeared in Massachusetts orchards in 1625 on land farmed by William Blaxton. The first reference found of it is in Massachusetts Horticulture Society for 1837-8 by John Lewis Russell, published in 1839. Quote “White sweet is properly “Tolman Sweeting”, a fine yellow fruit, with a blush next the sun, encircled by two or three distinct black lines from summit to base, flesh breaking, relieved by a slight acid, valuable.”

U.P. Hedrick in his Cyclopedia of Hardy Fruits 1922 states its development to 1822 which coincides with the time frame of Isaac’s son Darius and Isaac’s brother Stephen moving to Monroe and Wayne Counties respectively.

From a recently found article written on April 19, 1978 by then Perinton Town Historian Helen E. Butler who at the time owned the home built by Isaac’s son Darius.  “In Dutchess County the Tallman family had propagated the Tallman Sweet apples.  There were two kinds one yellow the other green with a streak.  Here they found land suitable for orchards and the hills on Whitney Road soon were covered in apple and peach orchards. Between the Tallman farms in 1855 they worked over 350 acres.  They shipped fruit to New York City as well as shipping dairy products.”

An alternative history in 1913 by Harriet M. Martin a Cornell Alumnus with the Station wrote the following; “An orchard standing near where the New York State Experimental Station is located in Ontario County, New York is said to have been set out by the Indians as early as 1817.  According to the foregoing authority, Ontario County has been the birth place of several varieties of apples. The Tolman originated on the farm of Mr. Thomas Tallman, near Geneva, one of the early settlers who planted seeds from an Indian orchard.”  She however didn’t document where the information came from.

It ripens late from October to December is of hardy and vigorous stock. Today the Tallman Sweet/Tolman Sweeting is considered an antique or heirloom apple. Old fashioned apples are making a comeback.

Now, how many other families can claim to have a fruit named after them…. 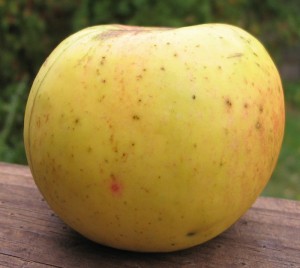 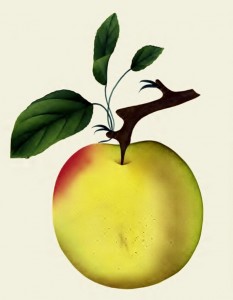 Photo above is referenced to adamapples.blogspot.com dedicated to those who love all apples.