Our tree has had doctors; lawyers; rich men; poor men; beggar-men and well, hopefully no thieves. 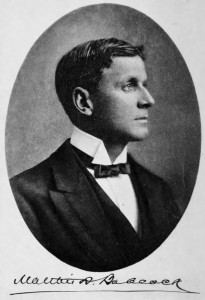 First, let’s talk of Rev. Babcock who could be compared to the Billy Graham of his time. He was born 3 Aug 1858 in Syracuse, New York eldest son of Henry and Emily Maria (Maltbie) Babcock. His first American ancestor was James Babcock (1612–1679), a native of England, who emigrated in 1642, settling first at Portsmouth, Rhode Island and then in Westerly, where his descendants became prominent. Maltbie’s great-grandfather, Henry Davis, was second president of Hamilton College, and his grandfather, Rev. Ebenezer Davenport Maltbie, was also a Presbyterian minister of note.

As a young man, Babcock was described as “tall and broad-shouldered” a muscular swimmer and baseball player. He was educated in the public schools of Syracuse and graduated in 1879 from Syracuse University with highest honors. He was a classmate and chum of John Frank Tallman, both were members of the University baseball team and Psi Upsilon Fraternity. He studied theology at the Auburn Theological Seminary, receiving his degree in 1882. He was selected to give the 1895 Alumni Address at Syracuse University where he received his Honorary Doctorate of Divinity.

He became pastor of the First Presbyterian Church the summer of 1882 in Lockport, NY. That fall he was married 4 Oct 1882 to Katherine Eliot Tallman of Poughkeepsie, NY youngest daughter of Judge John Peck Higgins Tallman. Katherine was three years younger than her brother John Francis who undoubtedly introduced them while at Syracuse University. He frequently took walks along the Niagara Escarpment to enjoy the overlook’s panoramic vista of upstate New York scenery and Lake Ontario, telling his wife he was “going out to see the Father’s world.” Love of sports and the ocean led them first to Duxbury, Mass for several years before buying land at Wiano on the south shore of Cape Cod and building a cottage there.

Then from 1887 till 1900 he served as pastor at the prestigious Brown Memorial Presbyterian Church in Baltimore. During his tenure there he set up an office at Johns Hopkins University where he counseled students. During those years he also visited Princeton, Yale and Harvard several times to perform similar services. While in Baltimore he took to visiting Florida each year for Tarpon fishing. A spin off from the Brown Church was formed and built a new church the Park Presbyterian in 1892 which was renamed Babcock Memorial after his death.

In 1900 he was finally lured away by the Brick Presbyterian Church in New York City, hired at a salary of $30,000. At the time the church was receiving the highest parishioner contributions of any Presbyterian church in the world. First formed in NYC in 1767 on Beekman Street before moving to Fifth Ave in 1858 and now today it’s located on Park Avenue.

February of 1901 he along with his wife and a group of mostly other clergymen went on a pilgrimage to the Holy Land.  In the later part of the pilgrimage he contracted Mediterranean fever, he was then taken to the International hospital in Naples, Italy. In a state of delirium he committed suicide age 42 on May 18, 1901. At his New York City memorial service the presiding clergyman eulogized him, “We do not need a candle to show a sunbeam…The work our brother has done — the life he lived speaks for him.” In Baltimore, a memorial service was held on June 2, 1901, where he was eulogized by various prominent educators and clergy, including Daniel C. Gilman, the first president of Johns Hopkins University, John F. Goucher, the founder of Goucher College, and Francis L. Patton, president of Princeton University. Babcock was praised as “always wise, patient, sympathetic and inspiring.” He was laid to rest 13 June 1901 in Oakwood Cemetery, Syracuse, New York his hometown next to his sons. After his death Katherine wrote a book “Thoughts for Every-Day Living”  with assistance from Mary R. Sanford from notes in the flyleaf of his bible along with spoken words published in November 1901 by Charles Scribner’s Sons. The book was sold for one dollar per copy, in it was 16 verse poem converted to a well-known 3 or 4 stanza hymn written by Maltbie while at Lockport “This Is My Father’s World”. She also wrote a book in 1902 “Letters from Egypt and Palestine” compiled from his notes while they were on their pilgrimage. That book is attached and can be viewed and read by clicking the link.

Katherine and Maltbie had two boys, both stillborn Edward Anderson Aug. 21, 1883 in Lockport and John Tallman Feb. 11, 1890 in Baltimore.

“This is my Father’s world.
Dreaming, I see His face.
I ope my eyes, and in glad surprise
Cry, “The Lord is in this place.”” —Maltbie D. Babcock

Now, the other is Frank Flood German oldest of two sons of Isaac Talman German and Lina Colgate Spence. He was born 24 Nov 1867 in Ovid, Seneca County, New York. Frank’s first American Ancestor was Peter Tallman a native of the Netherlands who immigrated into Rhode Island in 1648 from Barbados. His grandfather Stephen Tallman German was married to Sally Ann Southworth a descendant of the Mayflower.

September 14, 1893 he married Eliza “Lizzie” Mayell Gibbs the daughter of H. A. & Julia Gibbs of Buffalo, NY. He became rector of the St. Thomas Episcopalian Church in Mamaroneck, NY after serving as an assistant. Frank served as rector of St. Thomas for nearly 20 years before being transferred to Middletown, Conn. In Middletown he served as rector of the Church of Holy Trinity until his retirement in 1937. They had one son Spence Mayell born 15 March 1901 in Mamaroneck. Eliza died early August 1928 and Frank passed 3 January 1942; both are buried in Pine Grove Cemetery, Middletown along with their son, daughter-in-law and one grandson.

Frank should be known for the very interesting wedding ceremonies he performed and his humorous inclusion in a book about the life and art of Norman Rockwell.

“B.B. McGregor, Clasping Brides Hand, Dies; Last Act is to sign his Will, Just Drawn.” The son of Ambrose McGregor one of John D. Rockefellers partners who left him a millionaire. He married Clara Schlemmer the same day that he had surgery to remove a large kidney stone. B.B. died under the knife and left his bride everything; knowing the operation to be dangerous but left her the will. Rev. Frank F. German, rector of the Church of the St. Thomas, performed the ceremony and the funeral the next day.

“$50,000 IN PRESENTS” – Wedding at Which a Geneva Clergyman officiated the wedding of Miss Florence Lockwood Stokes and Frederick Ambrose Clark. The ceremony was performed at the Stokes Villa, Oriental Point, near Mamaroneck. She had a great horror of coaches and cabs, so all of the guests proceeded from the train to the villa in wagonettes or automobiles. The value of the silver and bric-a-brac alone which the bride received is said to be between $50,000 and $75,000. Because of the great value of the gifts, detectives from New York were on duty all night. Among the gifts was a necklace of pearls from the bridegroom’s mother, Mrs. Alfred Corning Clark. It was valued at $10,000 and worn by the bride during the ceremony.

“Miss Janet Huntington Brewster, daughter of Mr. and Mrs. Charles Brewster of Mt. Vernon Street, was married to Mr. Edward R. Murrow, (Noted American Broadcast Journalist) son of Mr. and Mrs. R. C. Murrow of Beaver, Washington at 4 o’clock Saturday afternoon at the home of her parents. Rev. Dr. Frank F. German, rector of the Church of the Holy Trinity, performed the ceremony…. Both the bride and groom were unattended….”

“Farrar, Straus and Giroux” – “American Mirror: The Life and Art of Norman Rockwell”

The fall of 1906 Norman Rockwell’s family moved from New York City north across the Long Island Sound to Mamaroneck a quiet woodsy suburb in Westchester County.

“In October 1906 the family joined the St. Thomas Episcopal Church, a handsome country church in Mamaroneck on a hill overlooking the sound. For the next year and a-half until his confirmation, Rockwell attended services every Sunday and once again sang in the choir. It was “less arduous” than the choir at his previous church, which was a relief. Yet he did not seem to care for the rector “Rev. Frank F. German”, and was bothered by his method of polishing the cross on the altar. “He’d spit on it and rub it with a soiled cloth,” Rockwell recalled and you suspect the gesture was less an affront to his spirituality than to his sense of cleanliness, which was already becoming obsessive.”