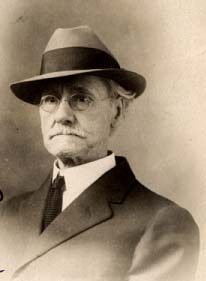 Born on his parent’s farm on Whitney Road, east of Fairport, New York, in Monroe County.  John received his early education in local schools, he then attended Macedon Academy in neighboring Wayne county.  Macedon was a co-ed institution founded by the Quakers offering three years’ education in math, science and languages.

Not 16 yet, in April 1867, he went to Minnesota to live with his brother Byron who was “farming it” in Cascade township, Olmsted County seven miles outside of Rochester.  He assisted in breaking virgin soil with the horse drawn plow.  He ran a McCormick reaper, which, like all its kind then in market, had no automatic rake; driving a horse team around a hundred-acre wheat field day after day and “raking off ” at the same time.  When his brother removed to Iowa in the spring of 1868 he remained and worked as a hired hand earning $18 a month.  One of the neighboring farmers a Scotsman “Mr. Graham” had a son Christopher who later became Dr. Christopher Graham an early partner in the Mayo Clinic of Rochester.  During harvest days in the fall he earned $2.50 for a Sundays toiling, plus a keg of beer.

The fall of 1870 he returned home, by now on Marshall St. Rochester, NY and worked for a short time in his father’s soap factory.  In February 1872, he found his first job in the newspaper industry, where he would remain and make his career.  This job was as telegraph editor with the Rochester “Post – Express” this followed as telegraph editor and staff member of the “Albany Argus”.  He would meet and fall in love with Rena Doney.  She moved with her family to Elgin on the northwest side of Chicago but, that didn’t stop John from marrying her there on February 18, 1874.  Their only child Sarah Irene was born in Albany February of 1875.  On, August 4, 1879, they left Rochester for St. Paul, Minnesota where he accepted a position with the Pioneer Press.  This began a “forty-seven” year stop in St. Paul as combined telegraph editor, railroad reporter and night editor before finally becoming the managing editor.  During his career, he was a staff member of the following: Rochester Democrat & Chronicle, Rochester Sunday Tribune, Rochester Express, Albany Argus, St Paul Pioneer Press where he was managing editor, St Paul Globe, St Paul Dispatch, St Paul Daily News and Minneapolis Journal.

Colleagues have said he was a good deal of a poet and good deal of humorist.  He often wrote his humorous stories under the pseudonyms of “Benjamin Backwater” and “Jay Tee”.  His poetic tendencies were inherited from his father, sister and grandmother all versifiers.  Poems credited to him were “Rest” and “The Young Elm” and “Minnesota in Panorama”.

His Contributions have been varied from his earliest remembrances of his father, an abolitionist using their house as part of the underground railroad.  His first encounter was in the winter of 1859 when a family was allowed to stay until transferring to another stop on their way to Canada.  In 1919 at the Albany Argus he contributed an article from the wire that came through the night of July 5, 1876; it was of the loss of Gen. Custer and his command at Little Big Horn.  “Custer’s Last Stand” was printed the next morning on the front page of the Argus while competitors had turned off their wires and missed the scoop.  April 11, 1925, he contributed an article to the Duluth Herald of his remembrance as a boy of hearing from the milkman the morning of April 15, 1865 of “Lincoln having been shot”.  At the time the family had moved from the farm to the village of Fairport.  He spoke of the scenes taking place 10 miles west in Rochester, that he’d never forget the memorial service given by the pastor of the Fairport Congregational Church.  He and his father awoke at 3 in the morning to join hundreds of others in mourning at the train station while the slow-moving death train with bells tolling and draping’s passed by.  He wrote of his brother Byron a Cavalry Captain of Company M, 22nd NY Cav. and his participation in the capture of Major Harry Gilmore a famous Confederate Baltimore Officer.  Of St. Paul, he especially remembered the winter of 1880-81 as “The Storm” with blockades of the railroads, county roads and particularly the suffering of the St Paul – Sioux City Railroad.  Of his interviews with the famous railroad builder James J. Hill of the “Great Northern Railway.”

Additionally, from 1909 to 1926 he was librarian of the Minnesota Historical Society newspaper department.  He lost his wife Rena on 11 August 1924, she was laid to rest in Roselawn Cemetery, Roselawn Minnesota.  After his retirement in 1926 he took a trip back east of unknown length and then moved to be with his daughter Irene and son-in-law Herbert Dewart in Gold Beach, Oregon.  He died there March 26, 1936 and was laid to rest in Gold Beach.

His uncle Darius and grandfather Isaac Tallman (1) brought apple seedlings from the family homestead in Dutchess County.  They were credited with propagating what became known has the “Tallman Sweet” a popular heirloom apple in the late 1800’s through the early 1900’s. 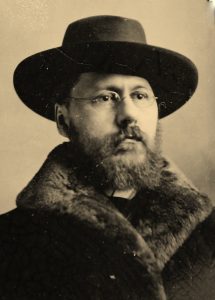 (1) Note: There were two distinct Talman families living in Rochester during the 1800’s.  One should not get confused between John Thurston Talman whose wife was Mary Eleanor Fitzhugh.  This family was responsible for the building downtown know as the ‘Talman building’.  It was occupied for several years by Frederick Douglass the noted African-American abolitionist, writer, orator and statesman.  Our John Jr. the son of John Talman of Perinton Township who along with his wife Sarah Elizabeth Foote moved ca. 1867-8 from Fairport to Marshall St. Rochester and started a soap factory.  This Talman’s father was Isaac Tallman who had nine children of which all the sons except two dropped an “l” from the surname, one Jabez who died young and the other Ezra P. a Baptist minister.