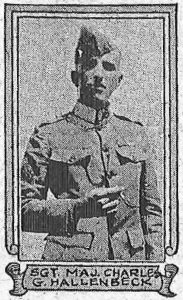 Sgt. Maj. Charles Garrett Hallenbeck, 26 years old off 1150 54th Street, Bay Ridge, a veteran who had the unique experience of serving three countries England, France and America in the World War, and who was awarded the Croix de Guerre with Star for being gassed in the service of France, died on October 4, 1920 on Mount Baldy, near Ontario California while attempting to climb to the summit with two companions to watch the sun rise above the fog.

He was stricken with acute dilation of the heart, due to his weakened condition from being gassed on the battlefields of France and also to the rarefied atmosphere at the elevation of 7500 feet to which the party had climbed.  As he sank in a dying condition, Sgt Maj. Hallenbeck begged his two companions the misses Marian and Elizabeth Burnhart to leave him and seek lower altitude as he feared they too would be endangered by the rare atmosphere.  They hurried down the trail to Camp Baldy for help, but Sgt. Maj. Hallenbeck died before aid reached him.

Sgt. Maj. Hallenbeck’s body arrived yesterday afternoon at his late home in Brooklyn, where the funeral service will be held on Saturday evening at 8 o’clock, conducted by the Rev. Alexander Wouters, pastor of the Edgewood Reformed Church, and there will also be Masonic services by Joppa Lodge No. 201 F. & A. M. of which Sgt. Maj. Hallenbeck was a member.  The internment on Sunday will be in Greenwood Cemetery.

Sgt. Maj. Hallenbeck was a wireless operator in the Marconi service when the World War started in 1914 and promptly enlisted for service with the British Navy, like many other young Americans who were anxious to get to the front while the United States remained neutral.  He was assigned to the Welsh Prince a transport for cavalry horses for the British government running from the Port of New York to Brest France.  On a trip on another transport, the boat was torpedoed near Brest and young Hallenbeck sent a wireless call to Brest for help with the result that a fleet of destroyers came out and rescued the entire crew of the transport.

After arriving in Brest young Hallenbeck went with three officers of the Welsh Prince on a sight-seeing tour, and while traveling on a train from Bordeaux to Paris all were ordered off the train as a bombardment of the French lines nearby was in progress.  German shells were bursting all around and in the excitement, young Hallenbeck became separated from his companions, got lost and soon after found himself in the French trenches, from which shells were being hurled back at the Germans.  He soon after enlisted in the French army and was gassed in a battled while serving in the French trenches.  During his service in the French army he helped the Frenchmen install signal and wireless stations in various parts of the country.  Because his disability from being gassed, he received an honorable discharge from the French army and came back to Brooklyn.  The Mexican border troubles were then going on and in June 1916 he enlisted as a bugler in Co. A, 23rd Regt. and served with that regiment on the Texas border until the combination of heat and hikes with his condition from being gassed rendered him incapable of further duty and he was honorably discharged.  After returning to Brooklyn he enlisted again for service at Camp Upton as gas defense instructor with the rank of Sergeant Major.  He remained there until the Camp was closed after the signing of the armistice.  He went to Idaho last May and then to California, where he was manager of the San Diego branch of the Remington Typewriter Company.

Sgt. Maj. Hallenbeck was born in Brooklyn on Dec. 25 1894, the son of Garrett Clarence Hallenbeck II and Angie Davis Hallenbeck.  He was educated in the Brooklyn schools and had been a wireless operator for the Marconi Company for two years before entering the service of the British Navy.  His father was for several years a member of the old 3rd Battery of Brooklyn and has been with the Remington Typewriter Company for 33 years.  His grandfather, Maj. G. C. Hallenbeck was the organizer of the old 13th Regiment of Brooklyn when he started on the top floor of the old building at Fulton and Pineapple streets.  Sgt. Maj. Hallenbeck is survived by his parents, two brothers Garrett Clarence Hallenbeck III who served all through the war in the United States Navy and Frank Garrett Hallenbeck and his grandmother Mary Estelle (Tallman) Davis of Poughkeepsie.