On October 13, 1918 from the WWI Meuse Argonne Offensive, George wrote the letter below. It was his last letter before returning home.  The map from Gen. Pershing’s final report shows the 37th Division at location 2 (as annotated) on that date.  The band was located within a few kilometers of that location.  It was sent to his step-grandfather, George Mullen, in Bellevue, Ohio. (Note: When he uses Dutch, Dutchman or Fritzie, he means Germans.)

George began his journey home on March 18, 1919 from Brest, France on the USS Maui.  The ship arrived at Hoboken, New Jersey on March 31, 1919. The arrival of the band was noted in an Akron, Ohio newspaper the next day. 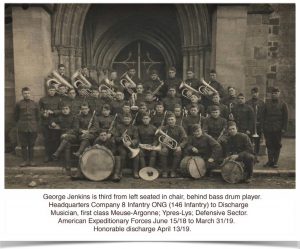 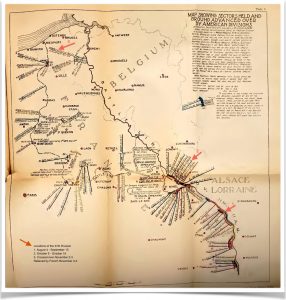 I would have written long before this, but conditions made it rather impossible, for we have been on a hop skip and jump for some time, but now we are settled for a while at least.  We are in a town that the Dutch (Germans) occupied until a short time ago, but were driven out by the “Yanks”.  The front is only a few kilometers from here, and the music from the machine guns can be heard quite plainly.  Fritzie (Germans) drops a few shells here occasionally.  One caved in the rear of this building and another took off the front roof, but the room I am occupying is still in good shape.  The Dutch (Germans) left here so quick, that they had no time to destroy the town and everything was left in fine shape.  The rooms in the different

buildings are just as they were when they occupied them, so we have excellent sleeping quarters.  Another fellow and I selected a fair room with a nice soft bed in it.  The first bed I’ve had since I landed in France.  We have an organ in here too and some folios of Dutch (German) music.  I even went so far as to bake pan cakes for breakfast the last two mornings.  Honestly if you were to step into this room you wouldn’t believe this was at the front, but I am quite sure when a few of Fritzies (Germans) “hell-plums” would land around here that you would soon become aware of the fact.  I could even hand you some good “Girard” cigars.  A Sales Commissary came thru this morning selling all sorts of tobacco and I laid in a supply. The first time I have smoked anything outside of “Bull Durham” for some time. We get a weekly issue of “Bull”

We were on a drive recently. The band didn’t advance with the regiment, so I went on special duty with the Intelligence Section of the Hdq’s Co.  I was with an observation post team, but did a little bit of everything.  It was surely an exciting experience, and believe me we certainly did back them up off some good French soil.  What sleep we had a chance to get was in shell holes which furnish protection from shrapnel, but believe me these are alway muddy, as it rained almost every day.  When we were relieved by another outfit, the hike back over the ground we had taken was rather long.  We did half of it the night we were relieved and finished it the next day.  About supper time we crossed the old Dutch (German) tenches and what had been no man’s land & then our trenches, where

our fellows had went over the top to give Dutchy (Germans) a jolt for his life.  Not far from here was where the band was camping and there I dropped out for a good wash, which was badly needed.  It surely was a dirty looking bunch that came marching back, mud from head to foot, and they were tired too, but the thought of the gain they had made kept all of them in good spirits.

A young scotchman in the band went up with the Colonel as orderly, his nickname is “Toady”.  He got his name because we used to put toads in his horn case, and when he would open the case the toads would jump out and give him an awful scare, for he surely was afraid of toads.  Well he was carrying a message thru the woods and passed a dugout and saw a Dutchman (German) peeking out the door.  One of our fellows a short dis-

tance off heard him say, “for pity-sakes come out of there”, the Dutchman (German) came out with his hands in his pockets; Toady thought he was reaching for a grenade and got quite frustrated, and said, ”get those bloody bloomen hands up,”  The Dutchman (German) obeyed and pointed to the door and said there were three more “kamerads” inside, and Toady had to persuade them to come out, evidently they were afraid of being shot.  Toady lined them up and turned them in.  We fellows had quite a laugh over it, for he will run a mile from a toad and not an inch from four Dutchmen (Germans).  There are a “million and one” incidents I could tell they will keep until the Kaiser agree to Wilsons peace proposals, and I can walk up the steps of 907 E. Main St.

We were paid day before yesterday and my allotement

had been taken out.  It was our July pay and the first installment of the allotement.  Let me know when it reaches you.

I think our Liberty bonds are in a New York bank, held for us until we get back, any way I have paid in full for it and will get it in time.

I saw all the Bellevue fellows shortly after the drive, and they are all well and feeling fine except John Underdown who has been in the base hospital for some time. 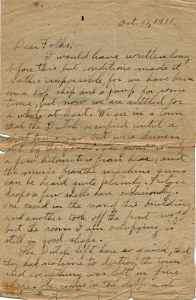 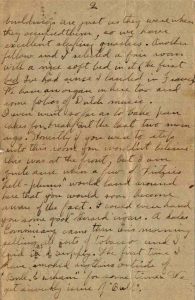 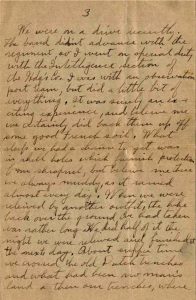 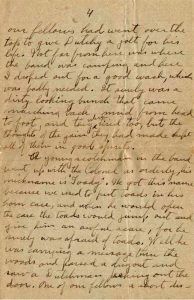 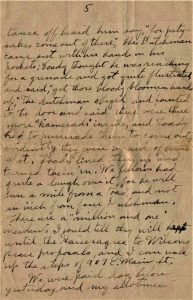 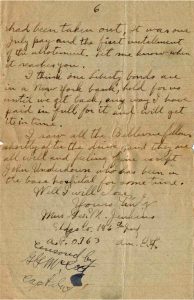 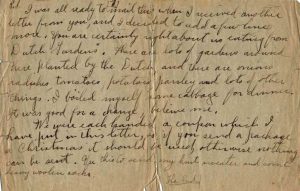 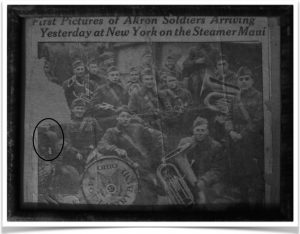 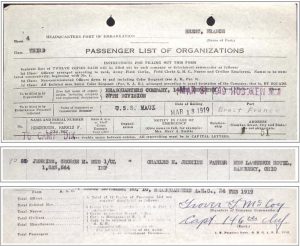 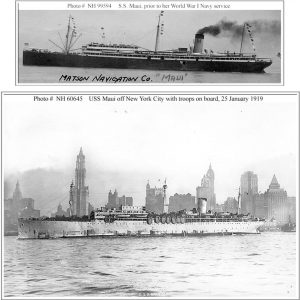 One thought on “WW I Soldier – Musician”