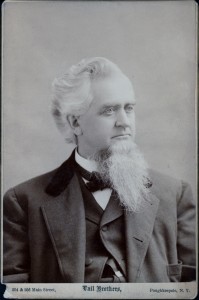 There’s really many interesting Tallman’s in my tree; doctors, lawyers, rich and poor but, if I had to pull one from my hat I’d have to choose John P. H. Tallman. Much has been written on him in Dutchess County history, all readily available in books, libraries and the internet. Rather than rewriting them I’ll try to stay with what he meant to my research.

I was aware of him long ago having read a paper about him my father had received from our cousin Mary Bordwell. Mary was the daughter of his grand aunt Ruth (Tallman) Fenner. John P H was Secretary of Poughkeepsie Female Collegiate College and signed the Diploma of my great aunt Charlotte Tallman. Mary had the Diploma for many years but, in the early 1950’s sent to Vassar mistakenly thinking it became part of that college.

While doing research in Poughkeepsie still focused only on my branch I came across two wills, those on my fourth and fifth grandfather’s (John and Darius). It was then that I realized John P H became the key to the entire tree. It turns out he was the only one that definitively identified his parents, grandparents and his great grandfather Darius from Nantucket whose wife was Miss Southworth.

His childhood and early youth were spent on the family farm on Chestnut Ridge in the northwest corner of the Town of Dover. In 1835 at age 15 he left and entered the new Methodist Episcopalian “Amenia Seminary” which opened that year with a determination for an education and better life. John P. H. as he was commonly known went on to read law under James Hooker and Virgil D. Bonesteel, later he was appointed a court clerk under Hon. Robert Wilkenson. In 1843 at age 23 he was admitted to practice law in New York State Courts as well as the U.S. District and Circuit Courts. His political standing was Democrat and was elected to two terms as Dutchess Court Surrogate handling wills, estates and adoptions. This brings up a second family interaction, his/our cousin David Solomon Tallman. David was the son of Solomon Tallman and Jane Ann Newton, when Solomon died in 1834 it was his grandfather who became his ward. Then his grandfather died in 1843, in his will he left the farm and money for a proper education to David Solomon and placed him in the care of family attorney John P H.

Now what did the P H in his name stand for? As it turned out from two sources, a descendant of his oldest daughter Mary and research that lead me to Wesleyan University. In 1850 he received an honorary degree of Master of Arts with his whole name John Peck Higgins Tallman spelled out. The unanswered question remains of where “Peck” and “Higgins” came from. Typically names from the time were biblical, from a famous person or family member. Since they don’t exist in Tallman’s one would assume they came from his maternal side “Almira Benham”.

John P H had two younger brothers Edward White a physician and Darius Benham a lifelong farmer. John married twice had four children two daughters and two sons, one of which died a child. John was one of the founders of Rural Cemetery in Poughkeepsie and is buried there along with both his wives, two sons, his parents, his grandfather and a mother-in-law are also in his lot. A daughter and son-in-law are also in the cemetery along with his brother Edward.

Mr. Tallman was elected in 1847, when he was but 26 years old.  He served two terms.  A portrait of him was excepted by the County Board of Supervisors and presented by his son John Frank Tallman.

The portrait represents Mr. Tallman at the age of 45.  It was painted by Richard Field Maynard of New York City who has a high reputation in artistic circles.  The portrait has been placed on the wall in the Surrogates Court.

The portrait as seen in 2016 stored in a closet, sadly deteriorated and in need of repair. 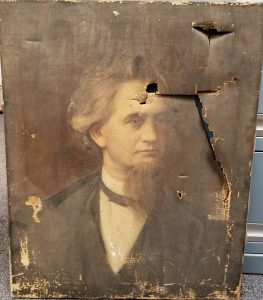