and this is ours…

Seems our Dr. Edward had a number of run-ins with the law.  From all the old Poughkeepsie newspaper articles he had an alcohol problem which probably led to his second wife Mary leaving.  As early as Oct 1868 he was arrested for striking a woman and public drunkenness.  His medical practice misadventures hit newspapers as early as Sept 5, 1879 in the “Syracuse Daily Journal”.  The article aimed toward then Governor Lucius Robinson noted “the Doctor” was sentenced 16 March 1878 to four years in Sing-Sing prison for causing a miscarriage, the Governor commuted his sentence to two years on Nov 15, 1879 bringing public criticism.

There are a number of articles of his arrest for drunkenness in later years.  June of 1904 the Doctor was arrested for first degree murder in the case of Mrs. Clara Wylde Cooper but was reduced to first degree manslaughter .  On June 11th Mrs. Cooper summoned him to her home in Poughquag village while her husband was gone.  She died on June 21st and he was arrested June 30th from the write up it’s quite apparent he performed an abortion that went bad.  She was 39 with six children and a husband who was not home.  When arrested the good doctor was wearing a long frock coat, striped pants, Panama hat and carried a stout cane.  Upon entering the jail, he wiped his partially bald head and asked for either morphine or alcohol or his physical condition would be shattered.

The only article in which the good doctor isn’t in trouble was in July 1854 he was called as a witness in the case of Lake vs. the People.  One George Lake murdered his wife Hannah Cromwell with an axe.  Edward was one of many witnesses called to testify as to the competency of the plaintiff in which the good doctor said he was quite sure that indeed George was competent during the crime.

From his reputation one has to wonder about first wife Prudence D. Champlin’s death, she died 30 days after giving birth to their daughter Prudence Serenia.  This child for the most part was raised by her grandparents and uncle Darius Benham Tallman.  His second wife Mary Agard either divorced or left him before 1865.  She and their two sons moved to Rensselaer County before finally moving to Albany about 1900.  His third wife Julia died of cancer at age 31 and presumed to be the woman listed in newspaper articles as his assistant.  A month prior to her death a lot in Rural Cemetery was purchased for both of them with help from William C. Smillie a retired local businessman and bank engraver.  He was convicted in the 1904 Cooper case, upon his release in 1906 he wound up in the Hudson River State Hospital for the insane where he died April 27, 1911.

23 March 1797 the New York State Legislature passed a law regulating doctors and surgeons.  Edward was admitted to practice on 9 Feb 1844 although its unknown if he attended a college or if he served a two year residence under a licensed physician.  From all this I’ll assume it’s why his brother the Hon. John P. H. Tallman didn’t mention him in his 1897 autobiography. 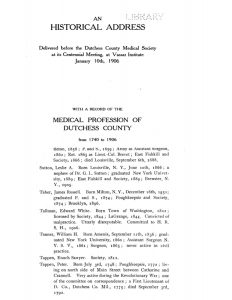 One thought on “We All Have a Blacksheep”