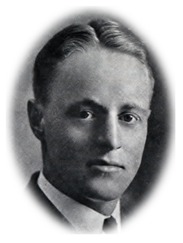 Jack’s childhood is put together from a diary his mother kept of their life. A family heirloom which I was very fortunate to acquire a few years ago.

John “Jack” Lathrop Tallman was born at 9 AM at the family residence at 55 Pineapple St., Brooklyn, NY he weighed 9 lbs. The only child of John Francis Tallman and Mai Comstock Lathrop. His grandparents were John P. H. and Sarah J. (Anderson) Tallman of Poughkeepsie, NY and Norman B. and Sarah (Comstock) Lathrop of Torrington, CT. He was christened Jan. 10, 1899 at home by his uncle Rev. Dr. Maltbie D. Babcock. His parents were married in Syracuse April 16, 1896 by Rev. Babcock. Rev. Babcock was the husband of John’s sister Katherine.

In September 1903, they moved to 39 S. Oxford St. Brooklyn. For whatever reason John and Mai’s marriage started souring; from the diary it’s indicated that in May 1904 she stored all her things and in June she and Jack moved to Syracuse. Jack would spend his formative years growing up in Syracuse around the Babcock’s. Mai’s older sister was married to Howard Babcock and her sister-in-law Katherine was married to Rev. Maltbie Babcock.  In October 1905, he learned to ride a bicycle, in February ‘06’ he had the 3 day measles and during the summer he learned to swim and dive. That September he entered Prescott Elementary and in December he came down with the mumps which he promptly gave to his Aunt Katherine. In 1907 he skipped a grade to 5th and again in ‘08’ he skipped two grades to 7th. In August of 1908, he learned to play golf and the next month his father bought him his first set of clubs; he got a first baseman’s glove that Christmas. The summer of 1909 was spent playing golf and tennis every day on Block Island. Located 13 miles off the south coast of Rhode Island the island is known as a popular summer tourist destination. Almost every Christmas was spent at the Babcock’s in Syracuse. In the summer of 1911, with his parents temporarily back together, they went on a family trip. Their first stop was at Niagara Falls, then a steamer on to the Thousand Islands, leaving there they shot the rapids of the St. Lawrence to Montreal. From there they sailed on to Quebec and then back to Montreal where they would head south down to Lake Champlain, visiting the Ausable Chasm known as the Grand Canyon of the Adirondacks. They stayed at Lake George where they fished and Jack shot his first rifle.

Jack entered North High School January 1912 graduating the fall of 1913, age 16, where he played baseball, hockey, tennis and golf. That summer he went to Nova Scotia and Newport with his father, then with his mother to Block Island where he won his first golf tournament. In the fall of ‘13’ he entered Dr. Holbrook’s Military Academy in Briar Cliff on the banks of the Hudson River, NY. Besides learning military drill skills, he studied math, Latin, German and French. His summer break of 1914 again started with 2 weeks at Block Island before going back to Syracuse the rest of the summer where he learned to ride a motorcycle. In 1915 he played on the school’s baseball team and graduated Cum Laude in June and went back to his mother’s in Syracuse. Starting in August he attended Syracuse University summer classes where he studied drawing and German. As usual he found time to again return to Block Island for a couple of weeks, this time by himself. He took a two-year course in bookkeeping and stenography. July of 1916 was spent attending a military training camp at Plattsburg. In August, he found his first job working at the Syracuse Herald-Journal for $12 a week and was tutored three evenings a week in Spanish.

In February 1917, he moved back to Brooklyn with his father. No one knows for sure but, it may have been due to the heart problems his father suffered from. He went to work at the Cuba Cane Sugar Co at 42 Wall Street, New York City earning $60 a month. The United States entered WW I in April of 1917 and Jack enlisted in the Naval Reserve in December. The Cane Company gave him a Christmas bonus. His dad died suddenly from heart failure the 12th of January 1918 and his mother came to stay with him. Not long after, he informed the Company he was leaving to enter active duty; for his dedication they gave him a wrist watch and a check for $200. In March, he was sent to Pelham Bay Naval Station, NYC where he earned a Quartermaster rating and was sent to Officer Candidate School. He was now 19, an Ensign and transferred to a Communication School. When the Armistice was signed the end of October he was discharged from service. It was then while visiting a boyhood friend at Princeton who convinced him to also enroll there.

While at Princeton he was on the Rowing Crew, played Hockey, was Manager of the Cottage Club, Pres. of the Musical Club and leader of the Glee Club. Like his earlier education experiences Jack graduated from Princeton with Honors in 1922. Through a Princeton friend he took a two-year training program with Goodyear Tire Company in Akron, Ohio starting in the factory learning the processes. Next stop in the Ad department and then in Sales working his way to number 25 out of 625 Salesmen. He was then transferred to Manchester, New Hampshire as Branch Manager. Following Goodyear he would make a number of moves working his way up the ladder in the “Advertising world.”

His first would be in Boston to work for the Carroll J. Swan advertising company for a year and a half. Now, with some experience under his belt, his next move was to the Blackman Company as an account executive in New York City. His accounts there were Proctor & Gamble, U.S. Rubber and Socony Vacuum. In March 1930, he took a position as assistant manager of the J. Walter Thompson Advertising Agency in Antwerp, Belgium. His wife would move with him but, it was short lived due to his suffering appendicitis in May. The surgery was performed in the American Hospital in Paris. He remained in the hospital till mid-August when they sent him to the London office where he only stayed three weeks. Whether he quit or it was a mutual decision he returned home to Syracuse and in November 1930 took the same position with Barlow (Soule), Feeley & Richmond Ad Agency there. He was promoted to manager in August 1931 and stayed in that position until March of 1934. That month he accepted a position as Advertising Executive for the Curtis Publishing Company at a base salary of $8,500 plus commissions. Curtis Publishing owned the Saturday Evening Post, Ladies Home Journal, Country Gentleman and Holiday Magazines. Jack’s responsibility was with the Saturday Evening Post with a territory of New York and Connecticut. He purchased a home in Darien, Connecticut before moving to New Canaan in 1947. He kept his position with the Post for 23 years until 1957; learning that he too like his father before him had heart problems and made a decision to retire.

Because of his health he made the decision in September of ‘57’ to move the family to Scottsdale, Ariz. They bought a new home there at 7011 Jackrabbit Road. For a while he did real-estate sales for Caldwell Banker until making acquaintances with Tom Chambers who had recently started a company called Ranch Wagon Foods a specialty food company. At the time, sales of boutique specialty foods was a $70 million dollar business. Jack became Tom’s partner handling distribution in July of ‘58.’ As it turned out, it was a very short lived partnership as Jack succumbed to a heart attack on October 24, 1958 in St. Joseph’s Hospital. He was remembered by all his friends as “Jack”; and an excellent Golfer. He won Club Championships in Connecticut at Wee Burn Country Club and was a past Governor of; also at Woodway Country Club and New Canaan Country Club. A lover of Sports Cars and racing he owned a Morgan and a Porsche. While in Scottsdale he was member of Scottsdale Country Club and Paradise Valley Country Club. An interesting note from his mother’s diary dated January 1918 reads “father died on the 12th at his house 711 Park Place, Brooklyn, NY very suddenly of heart trouble”.

He married first to Isabel Dickinson Maltby on May 4, 1929 in Greenwich, Conn. by the Rev. Dr. Charles G. Sewall, she was born May 8, 1902 in Corning, NY. They went on a honeymoon cruise after the wedding to Europe returning June 2nd to the Port of New York. In 1941 they built a new house in New Canaan moving in March 1942. In April of 1945, Isabel and Jack separated and Isabel obtained a divorce in Florida May 1946. No children.

On Oct. 3, 1947, he married Martha (Pace) Livesay whom he had met in Darien; she too was a divorcee with two young boys. She was a graduate of Baldwin School in Bryn Mawr, Penn. a well-known college prep school for girls and then attended Sarah Lawrence College. 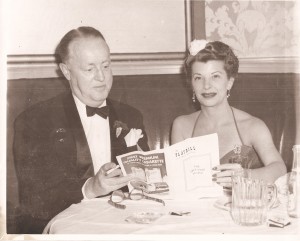 John and Martha are buried in Green Acres Memorial Park at the corner of N. Hayden and E. McKellips Rd. in Scottsdale, AZ. The picture above of Jack & Martha was taken in December 1952 at Le Cog Rouge 65 East 56th Street, NYC celebrating after the Broadway Play “Grey-eyed People” which starred Walter Matthau.

To provide some background into Jack’s lineage is the following:

His grandfather John P. H., had been a prominent Poughkeepsie Lawyer, later a Judge and involved in many outside successful businesses. His father, was also a lawyer, obtained his bachelor’s and master’s from Syracuse University. He started his career practicing in Poughkeepsie before accepting a management position for New York Life in New York City and finally in charge of underwriters for the Mutual Life Insurance in Brooklyn. He was also a noted art collector. His father-in-law, Norman Lathrop was a successful merchant and store owner in Torrington, Conn. Jack’s father in-fact had to pay a dowry in order to marry Mai Lathrop. Even though they separated, from the diary it’s easy to determine they maintained a friendly relationship and spent a number of family vacations together.