This article is about Perinton, New York’s Byron Talman (1838-1909); the 22nd NY and the capture of Confederate raider Major Harry Gilmor.

The 22nd NY Cavalry existed during the last eighteen months of the Civil War, when fighting closed on the Confederate capital in Virginia. Much of this time, the 22nd NY Cavalry regiment was assigned to the 3rd Division of the Cavalry Corps. The 3rd Division was commanded by General George Armstrong Custer, who had established a reputation at Gettysburg. The Cavalry Corps was under the overall command of General Philip Sheridan, whose battle experience included Stones River, Chattanooga, and Chickamauga.

The 22nd participated in two great campaigns — the Overland Campaign and the (Shenandoah) Valley Campaign. During the Overland Campaign, Sheridan’s Cavalry Corps was attached to Ulysses S. Grant’s Army of the Potomac as it progressed southward toward the Confederate capital, fighting battles at the Wilderness, Spotsylvania, and Cold Harbor. When battle lines became entrenched at Richmond and Petersburg, Grant made Sheridan’s Cavalry Corps into the autonomous Army of the Shenandoah. Their mission was to halt Confederate military operations in western Virginia and to eliminate the threat of attack on Washington. The Valley Campaign fought battles at Opequon or (Third Winchester), Cedar Creek, and Waynesboro. All of these battles, from the Wilderness to Waynesboro, are considered major battles, critical to the war’s outcome. The valley being rich fertile farmland serving as the breadbasket to Confederate troops (6). The 22nd fought them all within a six month period and suffered high casualties. 22nd casualties included 3 officers and 22 men killed, or died of wounds; 1 officer and 178 men died of disease, accidents and all other causes; total, 204. Of this number, 87 men died in Confederate prisons (6). The regiment especially distinguished itself at Kearneysville, Dinwiddle Court House and White Oak swamp.

The legacy of the 22nd or Rochester Cavalry and the Cavalry Corps is significant. When the war began, the Union Army had no effective cavalry. In contrast, the Confederacy had the illustrious cavalryman Maj. General J.E.B. Stuart. By the end of the campaigns, Stuart had been removed and the reputations of Custer and Sheridan established. In his farewell address to the division, Custer said, “In the past six months, although confronted by superior numbers,… you have never lost a gun, never lost a color, and have never been defeated.”

At Perinton on 12 October 1863, Talman was among the first to enlist in Company A of the 22nd NY Cavalry. He was elected (6) their First Sergeant, as more men volunteered, Companies B through M were formed. Talman was 25, had a wife (1), and had already sailed the Atlantic and Mediterranean. His father was an abolitionist who had campaigned for Lincoln in Perinton and Rochester. Talman served as First Sergeant through the Overland Campaign. For the Shenandoah Campaign, he was commissioned 18 Aug 1864 to second lieutenant in Company H. Later, he would command Company M as a Brevet (6) Captain and would frequently be in command of the battalion or regiment. He was mustered out 1 Aug 1865 officially as a second lieutenant. 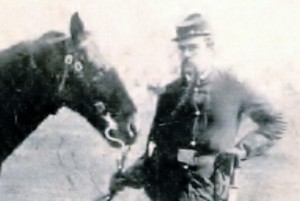 Talman received a gunshot wound to his left arm at Opequon (Winchester). There are several accounts. General Custer reported, “The enemy upon our approach delivered a well-directed volley of musketry, but before a second discharge could be given my command was in their midst, sabering right and left.” Talman’s brother, a journalist and historian, wrote, “he was shot in the left arm while leading a charge, but fought on until, faint from loss of blood, his colonel forced him to the rear.” In his promotion to Brevet Captain and the command of Company M, the Army record cited his “gallant and meritorious services at the Battle of Winchester, Va.” A report dated March 16, 1865 from George Sperry, Assistant Regimental Quarter Master, 22nd NY Cavalry stated in an assault near Rock Fish Gap that “four of the nine battle flags were captured” and lists Lt. Talman among many others being present.

Major Harry Gilmor was a Confederate raider who destroyed railroad bridges near Washington in Maryland and West Virginia. As the Confederacy grew desperate, Gilmor terrorized civilians and burned the town of Chambersburg, Penn, under orders from General John McCausland (6) nearly to the ground.

Gilmor’s Capture, recorded from another regimental history of that time, told that, Sheridan had scouts “Jessie Scouts.(2)” Union soldiers who had been selected for their courage and fitness for this dangerous work. They tracked Gilmor, and on 4 Feb 1865, they found him in bed, sound asleep, his revolver on a chair nearby. Gilmor was imprisoned for the remainder of the war. (Military records indicate the 22nd Cav were at Moorefield, WV Feb 4-6.)

Byron Talman’s role in Gilmor’s capture is unclear, as the story was not told during his life, but it is consistent with the known facts.

(1) Probably unbeknownst to Byron, his wife Elizabeth was already pregnant with their first child.

(2) From Wikipedia: created by John C. Fremont as irregular troops operating in the south dressed as Confederate wearing a white handkerchief over their shoulders and commanded by Maj. Henry Young.

(3) Byron’s younger brother John Talman Jr. held a career in the newspaper industry from the 1870’s thru 1908. In 1909 he went to work for the Minnesota Historical Society; even then he contributed numerous articles on many subjects in both newspapers and magazines. In studying a number of his articles it may be noted he often embellished them.

(4) In 1866 Col. Harry Gilmor wrote “Four Years in the Saddle” published by the Harper Bros. and on pages 173-4 he describes Union Major Harry Young along with four men as his captors. Additionally, he went on to describe that they were dressed as Confederates. That upon leaving there were an additional 200 Union Cavalry drawn up across the river. “The 22nd Pennsylvania Cavalry and Ringgold Battalion” by S. C. Farr 1911 pages 448-9 tells a similar version. This unit served in the Shenandoah and many of its soldiers were from Chambersburg, which was burned 30 July 1864.

(5) John’s account of “he was the captor” mocks Gilmor, who was an exceptional braggart, boasting in the newspapers and defying his pursuers. 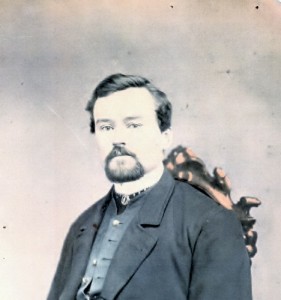 After the war, Talman and his wife Elizabeth Thompson first moved to Minnesota before moving on to Iowa and the quiet life as a farmer. They would become the parents of eight children, 4 sons and 4 daughters. Byron and was buried in Williams Cemetery 1909 near his grandchildren in Williams, Iowa. Tragically, an 1896 tuberculosis epidemic took the lives of three of his grandchildren (by daughter Ida May) — except my grandfather Frank.