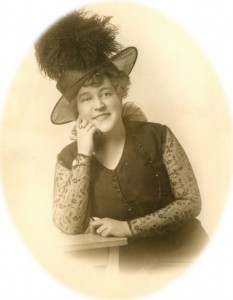 Miss Durham was a singer and comedic actress of early burlesque and vaudeville. She was married three times, known as “Nell” to family and friends and as Lillian Durham on stage. “Nell” was the youngest of four children and the only daughter of Silas and Prudence Serenia (Tallman) Durham. She was born September 6, 1874 in Grand Rapids, Michigan, her mother Prudence was my 3rd cousin 2X removed. Just three when her father died in 1877, she and her brothers were raised by their mother who didn’t remarry again until 1892. Lillian was a talented vocalist from an early age, by her ability to sing clearly and with no apparent effort she could reach “G” above high “C.” While still just a teenager she dreamt of a career in vaudeville as an operatic soprano and actress. At just 16 in 1890, she met vaudevillian comedic actor Frederick “Fred” James Green and they married. Together they started their own production company the “Lillian Durham Co.”, one of their productions from 1895 was “Jeremiah”. A son, Fred Jr., was born 7 May 1897 while performing in Nashville; their marriage however would end with divorce in 1905.

Her reputation suffered a blow in April 1909, when she was arrested in Philadelphia for allegedly threatening attempts of blackmailing wealthy oilman William Annear. Mrs. Lillian Green, better known as Miss Lillian Durham, an actress, was held under $2,000 bail by Magistrate Harris. Mr. Annear was also held under $1,000 bail by Magistrate Boyle. In her defense, Mrs. Green appeared in answer to proceedings brought by Annear, after she had sued him for $50,000 damages for assault and battery and breach of promise of marriage.

Having taken up residence in Philadelphia, with her career suffering a downturn, she met June Stone, they would marry in January 1910 in Clark County, Indiana. They took up residence in Louisville, KY where June was the Traveling Passenger Agent for the Louisville-Nashville Railroad. June was the son of Henry Lane Stone, a member of the Kentucky State Legislature; General Council for the Louisville-Nashville Railroad; and author of “Morgan’s Men” – A Narrative of Personal Experience’s. By 1912 they moved to Los Angeles with June starting a law practice and they were writing one-act plays. He became ill September of 1913 and returned to Louisville where he died the 22nd of Bright’s disease (kidney failure).

She would finally marry George Knight in California, at the time of her passing she lived at the Springer Hotel on Taylor St., San Francisco. She was interred in Cypress Lawn Memorial Park, San Mateo County, CA. She leaves her only son Fred J. Green, of the United Press International and four grandsons.

The following is a glimpse into “Nell’s” career path. Her early days were spent in trying to make a success of her own Company she’d started with Fred Green. However, by 1896 and beyond she would take work with several vaudeville companies of the day. First with Ferguson & Emerick in 1896; the Holden Comedy Co in 1899; The Murray & Mack Company; Webber & Fields from 1901-1904 in “Hoity Toity” as an understudy of Lillian Russel. It played at the Weber & Fields Music Hall, NYC. Weber & Fields are credited with the first burlesque theater in 1896. Briefly she was with the Charles Horwitz Co. at the Harlem Opera House and the Peters & Green Co.

She appeared with such other noted vaudevillians as W. C. Fields, Lillian Russel, Eddie Cantor, Fay Templeton, Max Bloom, Clara Howard, Harry West, and Sam Howe. Her most noted shows were the long runs of “Hoity Toity”, “The Sunny Side of Broadway” that started in 1908 again with Murray & Mack and the McSorley Twins. I believe her last Broadway appearance was but, as one of a couple of dozen Ziegfeld Glorified Girls in “Whoopee” starring Eddie Cantor with Buddy Epson in a small role. “Whoopee” based on “The Nervous Wreck” by Owen Davis ran from December 4, 1928 through November 23, 1929 (407 performances). For the first time Lillian was billed as Lillian Knight. 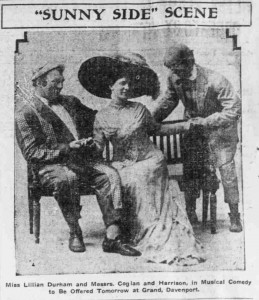 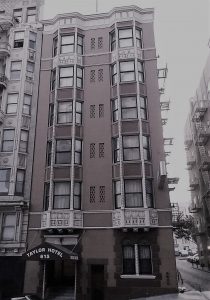