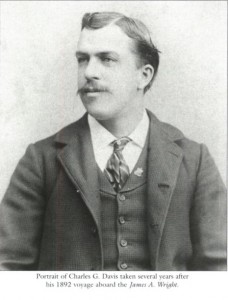 Charles was one of America’s leading model ship builders; his models are readily found in museums. In the first half of the twentieth century he was an acclaimed naval architect and boating author.

Charles was the son of Mary Estelle (Tallman) and Theodore Whitehead Davis and the grandson of John Peck Higgins Tallman. Five foot eight, blue eyed Charles Gerard married Minnie Webber in 1896 she was born in 1877. Their children were Camilla born in 1897, Theodore W. in 1899, Carrie Belle in 1900 (died young) and William Tallman born in 1902. He began his love of boats and sailing at an early age. As a child growing up in Poughkeepsie he would sit on the town dock jutting into the Hudson River watching ships and listening to the boatman tales. While still a youngster his father a Civil Engineer and ex-naval officer moved the family to Brooklyn. There he took to yachting with his father and brother, while in his spare time he would rove Brooklyn’s docks watching the larger ships loading and unloading their cargo. He and his older brother, William, built their own boat in 1884, cruising the Hudson and Western Long Island Sound before purchasing, refitting and racing an old sandbagger.

In 1889 he went to work in New York as a draftsman for William Gardner, the Clydeside Scots steam yacht designer. He also filled in on a job at T.R. Webber’s boat shop where he began to do some independent designing. His eyesight became affected in 1892, his doctor recommended he find a job with less eye strain. In August ‘92’ he signed on in NYC as an AB (able seaman) at $18 a month on the Bark “JAMES A. WRIGHT” out of Boston for a trip around Cape Horn to Chile. In 2004 a book “Around Cape Horn” was written by Neal Parker from the manuscript that Charles had written upon his return. After the “Horn Adventure” he then spent another year in Gardner’s office, before again going to sea in the “J. PERCY BERTRAM” in the West Indies trade. Upon his return from this trip, he began to design racing boats for Webber and later for Larry Huntington in New Rochelle, N.Y.

In 1898 he went to work for Thomas Day founder of “The Rudder” the leading yachting magazine of its day and was its design editor for several years. At the outbreak of World War I he joined the Elco Boat builder company, managing their plans at Halifax, Nova Scotia and in Montreal where wooden submarine chasers were being assembled for England. In 1917 he became general manager of the Trailer Ship Building Corporation at Cornwells, Pa. supervising the building of wooden steam, and after the War he became associated with the United States Maritime Service. From 1925 to 1927 he was in retirement in St. Petersburg, Florida, but returned to Port Washington to work as a draftsman under A. Couch for Toms & King, Inc.

In 1935 Davis again retired. He moved to Cazenovia, N.Y. and began building ship models, many of which are on display in the Stillman Building at Mystic Seaport, Connecticut. In 1940 he was called out of retirement by the Navy to become head hull inspector for wooden PT boats and minesweepers at the Nevins, Jacobs & United Shipyards at City Island, N.Y. He retired for a third time at the end of World War II.

In 1899 he skippered the “Genesee” built for the Rochester Club but, actually represented the Chicago Club winning race 2, 3 & 4 to win the “Canada’s Cup.” The race was sailed at Toronto; the Canada’s Cup Races have been held since 1896 on the Great Lakes between The Royal Canadian Yacht Club of Toronto and an American Club. The yachts were 35-foot class with crews of six, and not to exceed 1050 pounds. The Championship was determined by the best of five races. The Canada’s Cup, which stands for supremacy of match racing on the Great Lakes, still continues in the 21st Century.

He was a charter member of the Cruising Club. He was also an enthusiastic and skillful racer of small boats, and often enlisted his sons, Theodore and William Tallman, to crew for him. As an author, he wrote many technical articles for Yachting, The Rudder, Motor Boat and other magazines. Besides the novel “Around Cape Horn” developed from his manuscript, he wrote several books on sailing ships and ship models. He died in Manor Haven on January 22, 1959 in Port Washington, Nassau Co., NY at age 80. He’s buried in Beechwoods Cemetery, New Rochelle, NY along with his wife Mimmi.